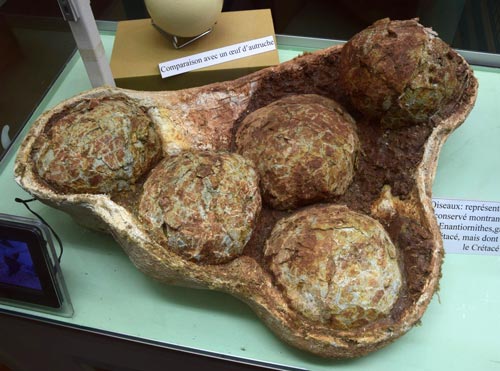 The highlight of my time as a member of Dinosaur Society when it operated in the 1990s was the two field trips in which I participated. One involved scrambling around on the cliffs at Whitby to investigate dinosaur footprints, the other was a more sedate trip to the Isle of Wight. When I found recently that the Dinosaur Society had started up again, my most cherished hope was that I would be able to go on more field trips. Hence I was thrilled to have the opportunity to take part in one led by Professor Richard Moody (Dick) and Dr Eric Buffetaut, director of research at Centre National de la Recherche Scientifique (CNRS). The trip was a joint one for the Dinosaur Society, the GA and HOGG. Its goals centred on dinosaur egg sites and trackways, along with the geology of the spectacular limestone formations of southwestern France.

The journey began rather more spectacularly than we would have liked, as we landed at Marseille airport in a thunderstorm. The descent was “exhilarating”. We picked up the expedition’s two vehicles, a people carrier and a Fiat car, in pouring rain and pitch blackness. I didn’t envy the two drivers, suddenly thrown into continental driving with flooding on the roads. Nevertheless, we reached our first hotel on the outskirts of Aix-en-Provence without incident and our spirits were raised by an excellent late meal in a local restaurant. In retrospect, we realised we were lucky: a number of people were killed in the floods only a few miles away.

Next morning we set off for a specially arranged visit to the palaeontological collections of the Natural History Museum of Aix-en-Provence. They used to be housed in a picturesque historical mansion in the town centre. It wasn’t, however, ideally suited for the role and no longer houses the museum. The collections are currently in storage in a large warehouse on the outskirts until the new museum premises are ready in some years’ time. We were privileged to be shown the collections by Thierry Tortosa, who is a Curator at Réserve Naturelle Nationale Sainte Victoire (where we would be going in the afternoon). First of all he introduced us to the geology of the area in the Campanian/ Maastrichtian periods of the late Cretaceous, when what is now Aix was part of the large Iberico-Armorican island. Around Aix, there was a flood plain, with a river flowing east to west into a lacustrine feature.

He then introduced us to some of the various dinosaurs attested from the region:

Thierry showed us many specimens, pulling out drawers and using a mechanical pallet shifter for larger boxes. The size range of theropod teeth was interesting. The tiniest suggest the presence of a small Richardoestesia-like theropod. We also looked at the huge number of dinosaur eggs the museum holds. No embryos have been found in any of the eggs from France, so the identity of the parents remains unknown. Thierry mentioned how much of the new dinosaur material has come to light as the result of roadworks.

Thierry also generously told us about his current research on titanosaur fossils in the museum.

The museum’s collections are not restricted to dinosaurs. We were also shown contemporary fossils of tortoise, crocodiles, mammals, pterosaurs, a fresh-water coelacanth and a rare fluviatile mosasaurid. Eric proudly introduced us to the cast of the pelvis of a very large Cretaceous flightless bird named Gargantuavis that he had named. Its identity was disputed and some put forward the idea that it was not a bird but a pterosaur. However, bone histology supports its bird nature.

We had time to ask questions and wander alone, before the museum’s curator of paleontology, Yves Dutour, led us into rooms further into the warehouse, where we were introduced to the museum’s stunning collection of 19th-century taxidermy.

Eventually we were dragged away to a substantial lunch at a local restaurant, before our afternoon field trip to the dinosaur egg site of Montagne Sainte-Victoire. Until recently, I hadn’t associated the dinosaur egg sites of France with Mont Saint-Victoire, which I knew as the mountain that Cézanne painted so often. It’s actually a national reserve, of which Thierry is curator, and he accompanied us to explain the site and tell us more about the eggs. Classified by their shape as Megaloolithidae, they have been found here in enormous quantities. Unhatched eggs are rare. Thierry explained that he is currently trying to examine the eggs stratigraphically. Is there any change in the eggs over time?

Can they be used as a stratigraphic tool? He brought along with him in his backpack a complete egg – to the delight of the many young children who were enjoying a sunny Sunday afternoon’s outing on the mountain! Thierry was very happy to show it them.

Next he set us to looking for the remains of eggshell on the outcrop where we were standing. Sure enough, we learnt quickly to identify egg by its thinness and the characteristic bumps on the surface. Then we began to see whole eggs within the rock, sometimes in groups. Sometimes we could see a rounded shape, but more usually it was a cross section, just as when you cut off the top of your breakfast egg. This kept us happily amused for some time, before we kept the geologists amongst us happy with a short walk to a nearby marble quarry, which was worked until the 1950s.

The next day was non-dinosaur but featured breath-taking scenery as we drove through the Ardèche to Vallon-Pont-d’Arc via the recently opened replica of the Chauvet cave. Some of the paintings in the original cave have been dated as early as 32,000 years old, though this early date is disputed by some.

Vallon-Pont-d’Arc is famous for its limestone arch, the largest natural one in Europe. By the time we walked down from the hotel to admire it, it was already dusk. We were all bitten by the river mosquitoes and relatives of the horse fly!

Next day was back to palaeontology.

When we made a coffee stop at a mining town called La Grand-Combe, we thought we would be able to include an exciting extra in the itinerary, as we saw signs for a “Fossil Forest”. After some effort, we found the entrance – only to find it was shut. Eric phoned but no one could come until much later, as it was manned by volunteers. So no Carboniferous extra! We contented ourselves by finding plant material in the coal exposed by where our cars were parked!

The highlight of the day for me was our visit to Saint-Laurent-de-Trèves, a small village famous for its Jurassic dinosaur footprints, assigned to the ichnotaxon Grallator minusculus. They are believed to have been made by a theropod in the region of 7 to 8 metres long.

The day continued with more magnificent limestone scenery, this time through the Canyon de Jonte. Vultures flew above our heads in lazy circles. The only difficulty here was finding somewhere appropriate to stop for photo opportunities! The road gave very few such opportunities.

Our goal was Millau. This town has an excellent museum. The ground floor has a splendid local palaeontological display, with an exceptionally complete skeleton of the Toarcian plesiosaur Occitanosaurus tournemirensis, along with dinosaur (and non-dinosaur) footprints, ammonites and more recent fossils such as aurochs horns. Downstairs it has an exceptionally good display of Gallo-Roman sigillata ware – it was a major producer of pottery for export. And upstairs is devoted to ravishing gloves – Millau was, and still is to a less degree, a glove-making town. However, photography is forbidden by the museum, so I can’t share any images.

Millau is also famous for its stunning viaduct over the River Tarn, designed by the French structural engineer Michel Virlogeux and British architect Norman Foster. It was every bit as astonishing in real life as in photographs.

From Millau, we drove on to our final fossil destination, the small town of Cruzy. Immediately on arrival, we were given a guided tour round their excellent museum, which is run mostly by volunteers. The museum is around 40 years old, and next year (2016) will mark the 20th anniversary of the current dinosaur excavations. Eric comes here twice a year to dig for 10 days in spring and 10 days in summer. The dinosaur material is from the Maastrichtian period of the Cretaceous. The fauna was varied, from the small dromaeosaur Variraptor to a large abelisaurid theropod. Teeth are common. Herbivores are more common than carnivores – a titanosaur, the ornithopod Rhabdodon, the nodosaurid Struthiosaurus. Eggs and nests have turned up – but again, no embryos. In addition to dinosaurs, a fragment of an azhdarchid pterosaur has turned up, along with fish (including coelacanth), Martinavis (an enantiornithine bird), Gargantuavis (which we first met in Aix), mosasaurs, lizards, turtles. The bones are from river deposits and so are not articulated. They were washed down in floods etc and so are jumbled together.

The museum had a major run on copies of Eric’s well-illustrated book, Sur les chemins des Dinosaures, as we all snapped up copies and had him sign them.

Next day we spent at three different palaeontological sites. The area around Cruzy is unusual in that it has magnificent exposures from three very different eras. First, Eric took us to the site that he has been working for six years. It was previously a vineyard and the owner was using a large chunk of rock as a tractor block. At some point, he realised it was unusual and took it to the local museum. It turned out to be the head of an abelisaur femur! An exploratory dig looked encouraging and the owner said that he would be stopping working that particular stretch of vineyard in the not too distant future. When he did, the palaeontologists were welcome to move in. The site is late Campanian/early Maastrichtian and represents a continental fluvial deposit of about 70 mya. So far about 1500 specimens have been taken out. The bones were concentrated by floods into a river channel, hence there are very few articulated specimens.

Our second stop of the day was a quarry, the Carrière de Coumiac, in which can be seen the type locality for the Frasnian/Fammenian boundary in the Devonian period – which was the time of one of the five major mass extinctions. We looked at Goniatites fossils and discussed possible burrows in the ancient sediments.

Our third trip was to Montouilers to visit the Miocene dig currently being worked by students under the supervision of palaeontologists from the University of Montpellier– with whom we had eaten a memorable meal the previous night: barbecued chicken on long trestle tables, set up in the fossil storage warehouse at Cruzy. I’d never eaten a meal before amid plaster of paris casts encasing fossil bones! This was an old site which was rediscovered when burrowing badgers dug up Miocene bones and left them on the surface. It’s now used as a site to field-train students. They showed us what they had found: Machaerodus bone (sabre tooth cat); Hipparion toes and teeth; turtle bone. Interestingly no fish have turned up, although there is evidence of water. This suggests the water is seasonal.

And that was the end of the palaeontological elements of our trip. The next day we visited the medieval site of Les Baux – again, fantastic limestone scenery. And we rounded off the trip with a visit to the Son et Lumière installation in the quarries at Les Baux. The quarries were almost like an Egyptian temple. First scenes of nature, then paintings of Leonardo da Vinci were projected onto the walls, accompanied by classical music. An unusual experience!

After that, it was on to the airport. It was a memorable, thoroughly enjoyable trip, with excellent company. I’m hoping it will be the first of many fieldtrips by the Dinosaur Society, and I’m hoping to meet other Dinosaur Society members on future outings. I know that Dick has plans…..