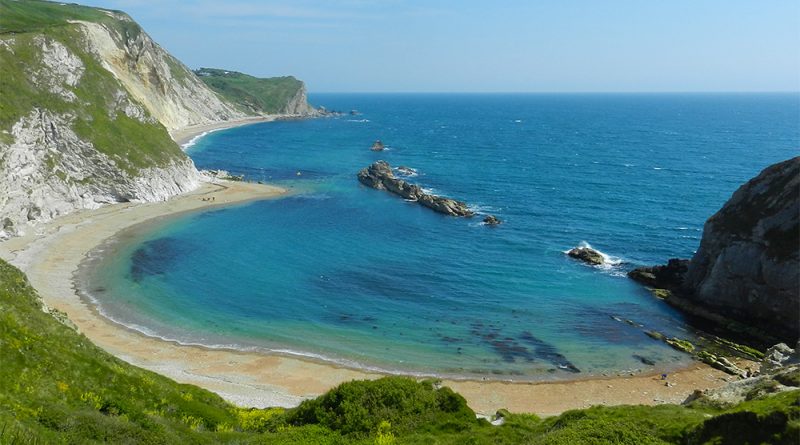 Waking to another bright spring morning on the third day, the group headed off for a final trip on the ferry, this time for a short stop at Peveril Point, on the way to the beauty spots of Lulworth Cove/Stair Hole and Durdle Door.

Peveril Point forms the southern end of Swanage Bay and was historically used by excise men for spotting smugglers. The limestones and shales here represent the type-section of the Purbeck Group and have been extensively studied, with a progression from evaporites at the base to marine and freshwater sediments in the upper parts.

The succession from Purbeck Group to Chalk can be observed at the next location visited, Lulworth Cove/Stair Hole.

The sequence here represents the transition from marine limestones in the Portlandian to sabkha deposits with soils in the Purbekian, fluviatile Wealden sediments then progressive flooding into pelagic Chalk.

Oil seeps occur in the Wealden sand, particularly at Stair Hole. Stair Hole itself shows a cross-section of the Lulworth Crumple. Fossil tree remains with surrounding stromatolite mounds can be seen here, part of the Great Dirt Bed as at Portland (see below).

Next on the agenda (following a well earned rest at The Smugglers Inn) was a visit to Osmington Mills where the lithology is Jurassic in age.

Alan Holliday kindly assisted the tour through the rest of the afternoon, and the morning after on The Isle of Portland. Alan is a friend of Dick Moody and also a member of Dorset DIGS, an organisation dedicated to preserving the riches of the Dorset coast.

The succession here displays a range of four regressive cycles followed by rapid transgressions, generally comprising an erosive base followed by limestones, clays and finally sandstones.

Oil seeps are seen in the Bencliff Grit in the second cycle. Also obvious are various sedimentary structures such as cross-bedding useful for inferring palaeoenvironment. The most distinctive features however are the large concretions or “doggers”. Succeeding the grit is the Osmington Oolite with cross-bedding and abundant ichnofauna, overlain by the Trigonia Clavellata bed.

Alan then took the party to a last stop off at Redcliff to observe the large scale slope failure.

The last night of the trip was spent at a very pleasant hotel in Weymouth.

The final day was again blessed with fine weather and began with the magnificent views of Chesil Beach and Portland Harbour from the Heights Hotel, Isle of Wight.

Alan took the group to King Barrow quarry to point out the various lithologies, including the famous building stone originally used by Inigo Jones for the Banqueting Hall and subsequently for a substantial proportion of the finest buildings in London. Also visible are the remains of flooded forests on the “Great Dirt Bed”.

Afterwards, we made our way down to Portland Beach to discuss the origin and nature of the unique landmark and its cobbles.

Burton Bradstock is also the site of the Hive Cafe, a family run beach-side restaurant serving freshly caught seafood – the most popular lunch location on the trip judging by the enthusiasm of the French guests.

After lunch, the group set off for Charmouth for an afternoon of fossil hunting, before heading to Lyme Regis to see the town and the museum.

Lyme Regis was the ideal location to end the fieldtrip highlighting the geology of the isle of Wight and Dorset.

The group finally headed back in the evening to Portsmouth to drop the French contingent at the ferry port.

The overall consensus was that the trip was a great success, a tiring but exhilarating sequence of locations showing the best of British scenery and geological heritage (and weather fortuitously).