Taken from an obituary published by The Herald, Scotland, 7th December, 2011: 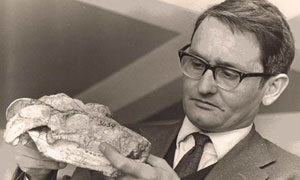 Dr Arthur Cruickshank, who has died aged 79, was one of a post-war generation of palaeontologists who laid the foundations for today’s research. Much of his work was on the extinct reptiles of the great southern continent of Gondwanaland, whose sundered fragments now include his native Africa, and South America, India and Australasia.

He was an only child of an expatriate Scots family in Kenya, and stayed in a Nairobi children’s home while his parents travelled for his father’s work as an engineer in the sisal plantations. He contracted chronic malaria and was therefore sent to Scotland in 1938, aged six, where he boarded at Dollar Academy in Clackmannan. Wartime restrictions further separated him from his family, but school holidays lodging in Coldstream gave him experience of what family life was like and a life-long love of the Borders.

After National Service in the RAF – where to his disappointment his sight was not good enough for a permanent aircrew career – he served with the Territorial Army and continued target rifle shooting, gaining a Cambridge Blue at Bisley iin 1957. He took up gliding, where he found freedom and relaxation, although he later told hair-raising stories of his time as an instructor at Grangemouth.

At Edinburgh University, Dr Cruickshank transferred from a geology to a zoology honours degree, doing his first research project on the teeth of giant rhizodontid fishes from the area’s Carboniferous swamps. In 1958 he moved to the University of Cambridge for a doctorate under Professor Rex Parrington, who allocated him the dicynodont Tetragonias. The resulting 45-page monograph, in the Journal of Zoology in 1967, was typical of the classic vertebrate palaeontological paper of the day: a full, bone-by-bone account, comparison with close relatives, and consideration of feeding and locomotion.

Dr Cruickshank continued to research dicynodonts. To non-experts, dicynodonts all look much the same – animals from three to 10 feet long, with barrel-shaped bodies, a large head with beak-like jaws for chopping plants, massive legs, and a stumpy tail. But to “dicynodontophiles” like Dr Cruickshank, they are objects of beauty – and, as the first major group of plant-eating land vertebrates, vital to understanding the evolution of life on Earth.

Dr Cruickshank took up a lecturing post at the Edinburgh University Department of Zoology, where he met his future wife Enid, a student from Roxburghshire – they were married in 1963 – and he then lectured at Napier College. In 1967 he became assistant director of the Bernard Price Institute for Palaeontological Research at the University of the Witwatersrand, Johannesburg.

There he seized the opportunities for work on the Permo-Triassic (around 300 to 200 million years old) rocks of southern Africa and their fossil reptiles. As well as dicynodonts, he also began to explore basal archosaurs – important ancestors of crocodiles and dinosaurs, and therefore birds. By chance, some of the best early archosaur fossils were in South African museums. His 1970s work on Proterosuchus and Erythrosuchus sparked wider interest in the evolution of the group, still today a hot topic of research and debate, in which Dr Cruickshank’s detailed anatomical descriptions are still used as definitive sources.

This work led to wider evolutionary studies: he wrote about overall patterns of archosaur evolution, on the origin of dinosaurs, and – with the palaeobotanist John Anderson – detailed overviews of vertebrate faunal successions worldwide.

All this work provided one of the first frameworks for understanding this crucial Permo-Triassic time: not only do Triassic rocks document the recovery of life from the most profound mass extinction of all time, at the end of the Permian, but it was also the time of the origin of the dinosaurs as well as key elements of modern vertebrate faunas, including the first frogs, turtles, crocodile ancestors, lizard ancestors, and mammals.

Dr Cruickshank found South Africa exciting but difficult, in both the job and the wider scene; back in the UK, he was a life-long liberal, active in the Liberal Democratic Party. The family returned to Scotland in 1978. However, the new Prime Minister, Mrs Thatcher, had clamped down on university research and he could find no permanent post, but took what work he could get, especially as an Open University tutor.

The family moved to Leicestershire in 1985 when Enid obtained a post as librarian in Rugby. A contract at Leicestershire Museums led Dr Cruickshank to change his research direction, to plesiosaurs, extinct sea-reptiles with four long flippers, of Jurassic and Cretaceous times (200 to 65 million years ago). He described the museums’ Rhomaleosaurus, using CT-scanning to study its nasal passages. His work on the first Westbury Pliosaur, on show at Bristol Museum, remains important for elucidating the affinities of the new giant Dorset Pliosaur. The Royal Society of London supported a return to his Gondwanaland roots, working on plesiosaurs in South Africa and Australasia.

Dr Cruickshank’s work on plesiosaurs helped reverse the neglect of this important group, and stimulate a younger generation of researchers with whose studies he was much involved, often supervising or examining their doctorates, or working on collaborative papers. He was always on hand to provide information and support.

The Cruickshanks returned to Denholm in 2006 and latterly lived in Hawick. Arthur Cruickshank is survived by his wife Enid, their children Susan, Peter and David, and three grandchildren.