The Dinosaur Society is pleased to announce our forthcoming conference to be held  on the 28th of October at the WWT London Wetland Centre, Barnes.

This will be followed by Dinosaur Days, a 2 day festival of geology and dinosaurs. 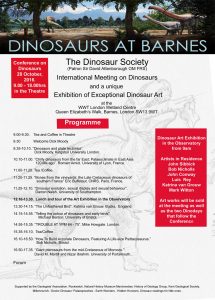 Dean Lomax, University of Manchester. The significance of the British dinosaur record.

The dinosaur art gallery will be open throughout the 3 days and will include several art workshops.